A letter to CGIAR in support of Open Access

Last week Indian Open Access (OA) advocate Professor Subbiah Arunachalam (Arun) organised a letter to the top management of CGIAR — the Consultative Group on International Agricultural Research. The letter spoke of the need for, and advantages of, making all of CGIAR's research output Open Access.

In doing so, it pointed out that one of CGIAR's research centres — the International Crops Research Institute for the Semi-Arid Tropics (ICRISAT) in India — has already introduced an OA mandate, and this has proved hugely successful.

Since the mandate was introduced, the letter says, OA has grown fast, "and the portal now has virtually all the research papers published in recent times, and all the books and learning material produced by ICRISAT researchers."

Yet, the letter adds, today ICRISAT is the only international agricultural research centre with an OA mandate. [After the letter was sent, the signatories discovered that The International Centre for Tropical Agriculture (CIAT) also has an open access mandate in place.]

Since the ICRISAT mandate has proved very successful, the letter suggests, now would be a good time for other research centres to follow suit. As the letter puts it, "We believe that it would be great if other CGIAR laboratories could also mandate open access to their research publications. Indeed, it would be a good idea to have a system wide Open Access mandate for CGIAR and to have interoperable OA repositories in each CGIAR laboratory."

The letter adds: "Such a development would provide a high level of visibility for the work of CGIAR and greatly advance agricultural research. Besides, journals published by CGIAR labs could also be made OA."

CGIAR, we should note, was initially an initiative of the Rockefeller Foundation, and is focused on reducing poverty and hunger, and improving human health and nutrition, as well as enhancing ecosystem resilience through high-quality international agricultural research, partnership and leadership.

Along with Arun, fifteen other OA advocates signed the letter (including me).

So why target CGIAR? I emailed Arun and asked him to explain the background. 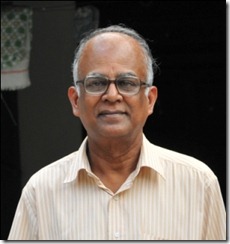 RP: Why did you decide to write a letter to CGIAR?

SA: What one does largely comes from one's own experience. After a long career in scholarly communication — as editor of scientific journals and secretary of a scholarly Academy in India — I spent 12 years as a volunteer with an NGO headed by Professor M S Swaminathan and was engaged in a rural development project focused on poverty alleviation. The letter to the CGIAR top management was a direct result of these two experiences.

RP: Essentially this is a developing world issue isn't it?

Most people in poor countries depend on agriculture for a living. How can they improve their lives if agricultural knowledge and innovations are privatised or, even if they are not privatised, made so expensive that they cannot afford to access them?

RP: The point here is that the traditional method of publishing research in subscription journals means that that research remains inaccessible to most researchers in the developing world, since most research institutions there cannot afford to pay the very costly subscriptions imposed by scholarly publishers?

SA: Correct. The CGIAR laboratories were conceived, largely by the Rockefeller Foundation, with the clear purpose of helping the developing countries, and later on funded by the World Bank, FAO, and UNDP.

Unlike development aid where funds from the rich countries are transferred to poor countries, the CGIAR was set up to transfer knowledge to the poor countries as well as help them be part of knowledge production. The difference is clear: If you want to help someone who is hungry better to teach him fishing rather than give him a fish.

Unfortunately, research findings of CGIAR laboratories often end up as articles in refereed professional journals, most of which are behind toll access. I thought it needed to be corrected.

RP: OA has been a cause for you for some years now hasn't it?

SA: I have been talking about and promoting open access for nearly a decade and indeed it has become a passion. Some of my friends, eminent academics and researchers, refer to me jokingly as "Mr Open Access of India." I found in my friend and former colleague Dr Venkataraman Balaji someone who can actually implement it in ICRISAT, the CGIAR laboratory located in India.

We worked together in holding a half-day symposium on Open Access as part of the annual meeting of the Indian Science Congress Association held at Hyderabad (close to where ICRISAT is located). And we invited Alma Swan from the UK and Professor Pushpa Bhargava, one of India's leading life scientists and humanists, to the symposium. As I did not have any funding support, Balaji hosted all the speakers as guests of ICRISAT.

Then about two years ago Dr Balaji convinced his Director General and the senior management of ICRISAT about the need to adopt OA for all research publications of ICRISAT.

RP: So your letter is the next step in an extended process of OA advocacy?

SA: It is. Long before ICRISAT decided to adopt OA I had met Enrica Poracari of CGIAR at a Global Knowledge Partnership meeting in Kuala Lumpur or Bangkok and I had broached the topic of OA and her response was positive. I have been in touch with her ever since then.

I am also associated with IAALD, a worldwide group of agricultural information professionals, and I talked to them about the need for adopting OA. Peter Ballantyne, an old friend of mine from his days at IICD, in The Hague, was the President of IAALD and a few months ago he joined one of the CGIAR laboratories.

I have been sending advocacy letters to all three of them (Balaji, Porcari and Ballantyne) and I got a sense that CGIAR information professionals and knowledge managers were now moving towards OA. So I thought it would help them if some of us activists in the Open Access movement wrote to the top management of CGIAR.

So I decided to draft a letter. I thought if the letter was signed by some of the leaders of the OA movement, it would have a much greater chance of achieving its purpose. I sent it out to about 20 champions of OA and 15 of them readily agreed to be signatories. As I did it in a short time, I might have missed some real champions of OA. My apologies to them.

But I wrote to CGIAR above all because agriculture is vital for the poor countries of the world. Besides, CGIAR is an umbrella organisation that covers 15 laboratories dealing with virtually all aspects of agriculture. Unlike the physics OA repository arXiv, and the biomedical research archive PubMed Central there is no central repository for agricultural research. And most importantly, one of the CGIAR laboratories has already adopted full Open Access. At the same time many others in the system do not know about it even a year after it began operation.

RP: What would you like people to do in response to the letter?

SA: If by 'people' you mean people belonging to CGIAR, I would like them to implement full OA in each one of their laboratories. I would like agricultural research organisations such as the US Department of Agriculture and major agricultural universities of the world to adopt OA.

I am happy to inform you, after Dr S Ayyappan took over as Director General of the Indian Council of Agricultural Research a few months ago, ICAR is moving fast towards OA. He made their two refereed journals OA and he has assigned a full-time Assistant Director General to implement many OA-related initiatives.

RP: What about other researchers, OA advocates and anyone else who is interested in helping to ensure the free flow of research information in the developing world. What would you propose they do?

SA: Any movement of this kind is like a temple car in India. The more people come forward to pull, the faster the car will move, and the faster it will reach its destination.

All those interested may also write to the Board of CGIAR and the Directors General of CGIAR laboratories recommending the adoption of an OA mandate.

They can also talk to individual researchers and persuade them to make their own research openly accessible.

I understand that knowledge managers in CGIAR laboratories are not averse to the idea of Open Access. If they know that many of us outside the system are also keen that they adopt OA, it will help them move to forward quickly.

Posted by Richard Poynder at 13:03 9 comments

The University of North Texas is hosting an Open Access Symposium on Tuesday, May 18, 2010.

The symposium is intended as a catalyst to move UNT and other academic institutions in Texas forward in their consideration of institutional open access policies.

The UNT Open Access Policy Committee has completed a first complete draft of a policy for open access to scholarly works at the University of North Texas. The Committee sees this as an initial step in broadening discussion by the UNT campus community on both open access and the policy itself.

The Policy is available here. This draft was distributed to the UNT Faculty Senate at its May 12, 2010 meeting. The Committee will be disseminating information across campus about the policy in the coming weeks.
Posted by Richard Poynder at 10:28 0 comments

Lund University Libraries reports that after seven years of operation the Directory of Open Access Journals (DOAJ) now has details of more than 5,000 OA journals, over 2,000 of which are searchable. This will mean, says Lars Bjornshauge and Anna-Lena Johansson,that soon more than 4,000 articles will be searchable.

We should note that establishign the growth of Gold OA is not an easy task.

Posted by Richard Poynder at 05:16 0 comments