Developing a unified rule for openness: Interview with Alek Tarkowski

Twenty years ago the European Organisation for Nuclear Research — better known as CERN — published a statement that made the technology that underpins the Web available on a royalty-free basis. By making the software required to run a web server, along with a basic browser and a library of code, free for all CERN paved the way for a revolution in innovation and creativity.

As a result, the Web has impacted the world in many varied ways  — not least by generating a stream of new products and services, and by allowing the creation of a multitude of novel new ways for sharing information and knowledge, and on a global basis.

It has also seen the emergence of an accompanying flood of free and open movements committed to promoting greater sharing of ideas and content, and for increased transparency and civic participation in organisations, in communities, and in government. We have seen, for instance, the emergence of the open access, free and open-source software, open data, open science, open politics, and open government movements.

And to facilitate the free flow of information and creativity enabled by the Web, Creative Commons was founded, and tasked with developing new-style licences to make sharing as frictionless as possible.

Initially these movements were bottom-up, citizen-led developments. More recently, governments have become interested in greater openness and sharing too, and begun to encourage and even require it, particularly where resources are created from public funds. Thus we have seen the US National Institutes of Health (NIH) introduce its Public Access Policy, the EU introduce its OA Policy, and we have seen the proposed FASTR Act and the recently announced US Open Data Policy.

To date, these top-down initiatives have tended to be piecemeal, and invariably focused on one type of public resource — e.g. publicly funded research or government data.

At the end of last year, however, a new bill was proposed in Poland that would aim to adopt a more joined-up approach to the openness of public resources. If enacted, the Open Public Resources Act would provide “a unified rule for as large a part of Poland’s public resources as possible”, says Alek Tarkowski an activist for greater openness in Poland.

Given its radical approach, the proposed bill has attracted a good deal of criticism, and it remains unclear how — or even whether — it will become law. If it does pass, says Tarkowski, it will doubtless be watered down in the process.

Whatever its fate, the proposed bill raises some interesting and complex issues. As such, it is worth reviewing its aspirations and objectives, and the nature of the criticism it attracted. In order to do this I conducted an email interview with Tarkowski recently, which I publish below.

Tarkowski was a member of the Board of Strategic Advisors to the Prime Minister of Poland that drafted the initial concept of the proposed bill. He is also the director of Centrum Cyfrowe Projekt: Polska and co-founder and Public Lead of Creative Commons Poland.

####
If you wish to read the interview with Alek Tarkowski, please click on the link below.
I am publishing the interview under the CC BY-NC-ND licence. As such, you are free to copy and distribute it as you wish, so long as you credit me as the author, do not alter or transform the text, and do not use it for any commercial purpose.
To read the interview (as a PDF file) click HERE.

Posted by Richard Poynder at 13:16 4 comments

When it was first announced there was an outcry from UK universities over the cost implications of the new policy. In response, on 7th September last year the UK Minister for Universities and Science David Willetts made an additional £10 million available to 30 research intensive universities to help pay OA transition costs.

But the controversy has continued regardless, and in January this year the House of Lords Science & Technology Committee launched an inquiry into the policy. The subsequent report roundly criticised RCUK for the way it had been implemented, and concluded that lack of clarity about the policy and the guidance offered was ‘unacceptable’. RCUK responded by making a number of “clarifications”, and extended the permissible embargo period before research papers could be made available under Green OA from 6 and 12 months, to 24 months — an extension that led many OA advocates to complain that a bad policy had been made worse. 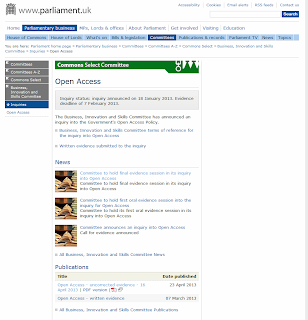 In the meantime, the House of Commons Business, Innovation and Skills (BIS) Select Committee had announced its own inquiry, which at the time of writing remains ongoing. During this inquiry a number of new issues have emerged, including complaints that some publishers are exploiting RCUK’s new policy to pump up their profits (profits that many believe are already unacceptably high). There are concerns, for instance, that the £10m in additional funding that Willetts provided is being used inappropriately. At the centre of these new concerns is Elsevier, the world’s largest scholarly publisher.

When last September Willetts made an additional £10 million available to research intensive universities it was widely assumed that the money had been provided to help them meet the costs arising from the fact that when the new RCUK policy came into effect on April 1st this year their researchers would have to start paying to publish their papers.

This assumption was understandable: When BIS announced the grant it said the money was, “to kick-start the process of developing policies and setting up funds to meet the costs of article processing charges (APCs).”

In the same press release Willetts was quoted saying, “This extra £10 million investment will help some of our universities move across to the open access model. This will usher in a new era of academic discovery and keep the UK at the forefront of research to drive innovation and growth.”

Critics argue, however, that at least some of this money is being used to pay for papers that have already been published in subscription journals. Specifically, they cite the fact that on December 20th last year Elsevier approached JISC Collections — the organisation that procures digital content on behalf of UK research institutions — and offered, in effect, to sell back to UK universities the papers that their researchers had published with it during 2012. That is, it offered to make papers that had been published in subscription journals OA retrospectively.
Read more »
Posted by Richard Poynder at 12:24 1 comments