What quality controls are utilised by PLOS ONE when selecting reviewers? Who is deemed eligible?

In 2011, I expressed concern about the PLOS ONE business model and its associated review process. My worries were focused on the use of what some have called light or “lite” peer review, and the “pay-to-publish” system used by PLOS ONE (and now by many other publishers). My worries were subsequently recorded on the PLOS ONE Wikipedia page.

Recent personal experience has increased my concern, and left me wondering about the way in which reviewers are recruited by PLOS ONE.

On 12th July, I received an email from a PLOS ONE academic editor inviting me to peer review a paper. I won’t say what the paper was entitled, or who the authors were, but it was on the topic of open access journals.

Since I am a blogger/journalist rather than an academic I was surprised to receive the invitation, and emailed PLOS ONE with the following question: “I have had an invitation to review the above paper. Can you point me to the rules on the eligibility of PLOS ONE reviewers?”

I received the following (I assume boilerplate) reply:

This did not address my question, so I also emailed the academic editor whose name had been at the bottom of the invitation. I am not going to name him, but I will say that he is based at Universidad de Las Palmas de Gran Canaria, “Was it you who sent me an invitation to review the above paper?” I asked. “If so, I am wondering why you invited me. Can you say?”

I received the following response: 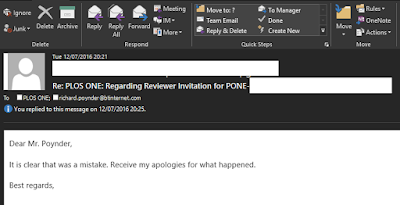 Let me be quite clear at the outset: I had and have no interest whatsoever in reviewing this or any other scholarly work, not least because there is absolutely no incentive for me to devote my time to reviewing papers. Moreover, the one time I did agree to review anything for an academic journal (an editorial rather than a paper), my suggestions were all rejected on the grounds that “the author says he is too busy to make the changes you suggested.” Clearly I had not made very good use of my time!

But as I say, my first response on receiving the PLOS ONE invitation was to wonder whether it is inappropriate for non-academics to review scholarly papers.

With these thoughts in mind I tweeted the invitation under the strapline “PLOS ONE invites journalist to review scholarly paper”. Somewhat to my surprise, everyone who responded said that they saw no problem with my reviewing a scholarly paper on open access (although it could not presumably be defined as “peer” review). Their reasoning was that they are confident that I have the necessary expertise. And Roger Schonfeld commented, “I’d like to see expertise welcomed into the scholarly conversation without regard to academic affiliation.”

On reading these responses I recalled that some OA advocates maintain that an important benefit of OA is that it encourages members of the public to take a greater interest in science, and to even take part in the process themselves – by means of “citizen science”.

The arrival of a new preprint server for the social sciences called SocArXiv comes just a month after news that Elsevier is acquiring the Social Science Research Network (SSRN), a preprint repository and online community founded in 1994 by two researchers. 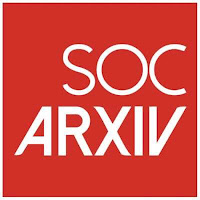 Given the concern and disappointment expressed over the SSRN purchase by researchers, it is no surprise that the launch of SocArXiv has been very well received. Still smarting from Elsevier’s 2013 acquisition of Mendeley – another formerly independent service for managing and sharing scholarly papers – many (especially OA advocates) were appalled to hear that the publisher has bought a second OA asset. The reasons for this were encapsulated in a blog post by University of Iowa law professor Paul Gowder entitled “SSRN has been captured by the enemy of open knowledge”.

This concern has also attracted the attention of the Federal Trade Commission (FTC) which has launched a review of the SSRN purchase. The FTC is currently contacting many institutions and experts in scholarly publishing to assess the implications of the acquisition, presumably in order to decide whether it needs to intervene in some way.

Elsevier is understandably keen to downplay the interest the US government is showing in its latest acquisition. “The Federal Trade Commission is conducting a routine, informal review of our acquisition of the Social Sciences Research network,” vice president and head of global corporate relations at Elsevier Tom Reller emailed me. “Elsevier’s interest in SSRN is and has been about SSRNs’ ethos, a place where it is free to upload, and free to download. We are working cooperatively with the FTC, and believe that the review will conclude favourably.”

In other words, Elsevier does not believe the FTC’s interest in its purchase will lead to a formal investigation.

But however timely SocArXiv’s launch may be, the service is not a response to the SSRN acquisition, the director of the new service, and professor of sociology at the University of Maryland, Philip Cohen assured me. “We were already in planning before we heard about the SSRN purchase.”

That said, the fledgling service is clearly keen to ride the wave of discontent that Elsevier’s latest move has engendered: it has begun to host preprints by means of a temporary arrangement until the platform’s construction is completed.

So what is SocArXiv? As the name suggests, it is modelled on the physics preprint server arXiv, and describes itself as a free, open access, open source archive for social science research. Authors are able to upload their preprints to the service and make them freely available to all. The papers will be provided with permanent identifiers to allow them to be linked to the latest version, or to versions published elsewhere. They can also be made available under Creative Commons licences, and analytics data will be provided to show how often papers have been accessed.

Registration to the service will be free and open to all, regardless of academic affiliation. In addition, registered users will be able to comment on and discuss papers.

However, unlike arXiv – which was conceived (and still largely continues to act) as a supplement to the traditional scholarly publishing system, it is hoped that SocArXiv will disrupt the traditional system, and help to eventually supplant it.