The Open Access Big Deal: Back to the Future

On a superficial reading open access is intended to do no more than what it says on the can: provide an internet-based scholarly communication system in which research is made available sans paywall – in other words, a system offering improved accessibility over the traditional subscription system.

On a deeper reading, however, we learn that the OA movement was a response to the unsustainably high costs of the subscription system and that it was based on a conviction that open access would be a more cost-effective way of sharing research – in other words, a system offering improved affordability.

In addition, it was argued, open access would be a more transparent way of doing things than the subscription-based system.

Essentially, the argument went like this: If researchers paid an article-processing charge (APC) every time they wanted to publish a paper (rather than librarians paying the costs of publishing by purchasing subscriptions to large bundles of journals courtesy of the so-called Big Deal), then not only could research papers be made freely available to all, but authors would be able to make price-based decisions when choosing where to publish.

This price transparency, argued OA advocates, would introduce market forces into scholarly publishing that are absent in the subscription system. It would also allow new open access publishers to enter the market with lower-priced products, which would help drive down prices.

In short, OA advocates promised that open access would not only provide greater accessibility but a more cost-effective scholarly communication system, thereby solving the affordability problem that has long dogged scholarly publishing. And to achieve this, they said, transparency is key.

Transparency is key because in order to make price-based decisions buyers need to be able to compare prices. While APCs allow this, Big Deals do not, because with the subscription system researchers have no idea whatsoever what costs are involved, and librarians (who buy on their behalf) do not have a published price list to work from and do not know what other librarians are paying for their Big Deals, since publishers insist on non-disclosure agreements (NDAs). In such an environment pricing is opaque and everyone bar the publishers has to fly blind.

As OA developed, however, it became apparent that most researchers do not have access to the necessary funds to pay APCs, so libraries have again had to start acting as intermediaries. In doing so, however, they have found the task of managing hundreds of APC payments on behalf of researchers difficult, time-consuming and expensive. For this reason, they have struggled to cope.

At the same time, European governments, funders and university leaders have become increasingly impatient at the time it is taking to achieve widescale open access.

These two things have led to the emergence of the OA Big Deal. Here agreements are signed with legacy publishers that combine bulk journal subscription fees (as with traditional Big Deals) plus bulk OA publishing fees so that authors can publish without personally having to pay APCs. Those librarians and university leaders signing these deals have therefore come to view the OA Big Deal as the best way of transitioning to a fully OA publishing environment. And while today the OA Big Deal is more of a European issue, it looks set to become the model of choice elsewhere in the global North (also here).

As we shall see, however, there are good reasons to doubt that this strategy can provide a satisfactory outcome.

Strikingly, it is the most vocal critics of legacy publishers and their prices (librarians and national university associations) who are promoting these deals, either because they fail to understand (or accept) the implications of what they are doing, or because they have been mesmerised by the EU’s rash  and unthought-through commitment to make all European research freely available by 2020.

It is also concerning that the negotiators of these OA Big Deals appear to have little appetite for transparency. What these agreements consist of, what they cost, and what kind of value for money they offer (or don’t offer), therefore, is generally unknown to anyone outside the small group of people taking part in in the negotiations.

Sixteen years ago, the Budapest Open Access Initiative (BOAI) predicted the dawn of a new age of scholarly communication. Its declaration begins, “An old tradition and a new technology have converged to make possible an unprecedented public good. The old tradition is the willingness of scientists and scholars to publish the fruits of their research in scholarly journals without payment, for the sake of inquiry and knowledge. The new technology is the internet.” 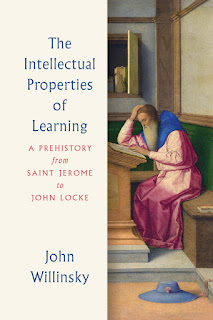 Looking back, we might want to suggest that OA advocates spent too much time in the early years promoting the merits of openness, and too little time working out the best way of marrying the old tradition with the new technology. In addition, more time should have been spent on establishing what other old traditions of learning would need to be accommodated (and how) if the new world of scholarly communication that BOAI envisaged was to be realised. That too little consideration was given to these matters doubtless explains why so much confusion surrounds open access today, and why we are seeing growing frustration with it.

In light of this, a new book by John Willinsky – The Intellectual Properties of Learning, A Prehistory from Saint Jerome to John Locke – is timely.

Willinsky sets out to place open access within the larger historical context of learning’s traditions, values, and norms. And he does so by casting his eye all the way back to the rise of the monasteries, and then forward to the Statute of Anne (1710), which for the first time brought the regulation of copyright under the control of the government and courts, rather than private parties.

Willinsky is more than qualified to undertake this task. A former teacher and now Khosla Family Professor of education at Stanford University, Willinsky is also director of the Public Knowledge Project and widely regarded within the OA movement as a leader.

Willinsky’s purpose is clearly to promote open access, by demonstrating that it is a natural development of the culture of learning. As he put it in a recent blog post, while current demands for free access to publicly funded research “may seem an artefact of the internet, I hold that efforts to extend access to such work are part of a historic struggle among those devoted to learning, which in the history of the West, date back to the book-sharing and -copying networks that operated within the non-proprietary realm of medieval monasticism.”

Willinsky’s is a worthy and interesting project, but in reading his new book one is tempted also to look for an explanation as to why the OA movement has in many ways stumbled.
Read more »
Posted by Richard Poynder at 15:55 0 comments