Since the birth of the open access movement in 2002, demands for greater openness and transparency in the research process have both grown and broadened.

Today there are calls not just for OA to research papers, but (amongst other things) to the underlying data, to peer review reports, and to lab notebooks. We have also seen a new term emerge to encompass these different trends: open science.

In response to these developments, earlier this year the Research Ideas & Outcomes (RIO) Journal was launched.

RIO’s mission is to open up the entire research cycle — by publishing project proposals, data, methods, workflows, software, project reports and research articles. These will all be made freely available on a single collaborative platform.

And to complete the picture, RIO uses a transparent, open and public peer-review process. The goal: to “catalyse change in research communication by publishing ideas, proposals and outcomes in order to increase transparency, trust and efficiency of the whole research ecosystem.”

Importantly, RIO is not intended for scientists alone. It is seeking content from all areas of academic research, including science, technology, humanities and the social sciences.

Unsurprisingly perhaps, the first grant proposal made openly available on RIO (on 17th December) was published by a physicist — Finnish-born Toma Susi, who is based at the University of Vienna in Austria.

Susi’s proposal — which has already received funding from the Austrian Science Fund (FWF) — is for a project called “Heteroatom quantum corrals and nanoplasmonics in graphene” (HeQuCoG). This is focused on the controlled manipulation of matter on the scale of atoms.

More specifically, the aim is to “to create atomically precise structures consisting of silicon and phosphorus atoms embedded in the lattice of graphene using a combination of ion implantation, first principles modelling and electron microscopy.”

The research has no specific application in mind but, as Susi points out, if “we are able to control the composition of matter on the atomic scale with such precision, there are bound to be eventual uses for the technology.”

Below Susi answers some questions I put to him about his proposal, and his experience of publishing on RIO.

RP: Can you start by saying what is new and different about the open access journal RIO, and why that is appealing to you?

TS: Personally, the whole idea of publishing all stages of the research cycle was something even I had not considered could or should be done. However, if one thinks about it objectively, in terms of an optimal way to advance science, it does make perfect sense. At the same time, as a working scientist, I can see how challenging a change of mind-set this will be… which makes me want to do what I can to support the effort.
Read more »
Posted by Richard Poynder at 18:58 0 comments 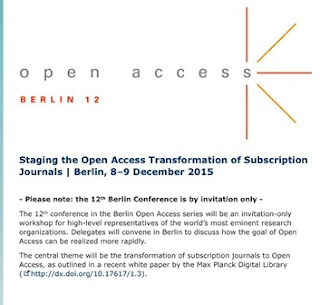 In October 2003, at a conference held by the Max Planck Society (MPG) and the European Cultural Heritage Online (ECHO) project, a document was drafted that came to be known as the Berlin Declaration on Open Access to Knowledge in the Sciences and Humanities.

More than 120 cultural and political organisations from around the world attended and the names of the signatories are openly available here.

Today the Berlin Declaration is held to be one of the keystone events of the open access movement — offering as it did a definition of open access, and calling as it did on all researchers to publish their work in accordance with the open principles outlined in the Declaration.

“In order to realize the vision of a global and accessible representation of knowledge,” the Declaration added, “the future Web has to be sustainable, interactive, and transparent.”

There have been annual follow-up conferences to monitor implementation of the Berlin Declaration since 2003, and these have been held in various parts of the world — in March 2005, for instance, I attended Berlin 3, which that year took place in Southampton (and for which I wrote a report). The majority of these conferences, however, have been held in Germany, with the last two seeing a return to Berlin. This year’s event (Berlin 12) was held on December 8th and 9th at the Seminaris CampusHotel Berlin.

Of course, open access conferences and gatherings are two a penny today. But given its historical importance, the annual Berlin conference is viewed as a significant event in the OA calendar. It was particularly striking, therefore, that this year (unlike most OA conferences, and so far as I am aware all previous Berlin conferences) Berlin 12 was “by invitation only”.

Also unlike other open access conferences, there was no live streaming of Berlin 12, and no press passes were available. And although a Twitter hashtag was available for the conference, this generated very little in the way of tweets, with most in any case coming from people who were not actually present at the conference,  including a tweet from a Max Planck librarian complaining that no MPG librarians had been invited to the conference.

Why it was decided to make Berlin 12 a closed event is not clear. We do however know who gave presentations as the agenda is online, and this indicates that there were 14 presentations, 6 of which were given by German presenters (and 4 of these by Max Planck people). This is a surprising ratio given that the subsequent press release described Berlin 12 as an international conference. There also appears to have been a shortage of women presenters (see here, here, and here).

But who were the 90 delegates who attended the conference? That we do not know. When I emailed the organisers to ask for a copy of the delegate list my question initially fell on deaf ears. After a number of failed attempts, I contacted the Conference Chair Ulrich Pöschl.

Pöschl replied, “In analogy to most if not all of the many scholarly conferences and workshops I have attended, we are not planning a public release of the participants’ list. As usual, the participants of the meeting received a list of the pre-registered participants’ names and affiliations, and there is nothing secret about it. However, I see no basis for releasing the conference participants’ list to non-participants, as we have not asked the participants if they would agree to distributing or publicly listing their names (which is not trivial under German data protection laws; e.g., on the web pages of my institute, I can list my co-workers only if they explicitly agree to it).”

This contrasts, it has to be said, with Berlin 10 (held in South Africa), where the delegate list was made freely available online, and is still there. Moreover, the Berlin 10 delegate list can be sorted by country, by institution and by name. There is also a wealth of information about the conference on the home page here.

We could add that publishing the delegate list for open access conferences appears to be pretty standard practice — see here and here for instance.

However, is Pöschl right to say that there is a specific German problem when it comes to publishing delegate lists? I don’t know, but I note that the delegate list for the annual conference for the Marine Ingredients Organisation (IFFO) (which was held in Berlin in September) can be downloaded here.

Transparency aside, what was the outcome of the Berlin 12 meeting? When I asked Pöschl he explained, “As specified in the official news release from the conference, the advice and statements of the participants will be incorporated in the formulation of an ‘Expression of Interest’ that outlines the goal of transforming subscription journals to open access publishing and shall be released in early 2016”.

This points to the fact that the central theme of the conference was the transformation of subscription journals to Open Access, as outlined in a recent white paper by the Max Planck Digital Library. Essentially, the proposal is to “flip” all scholarly journals from a subscription model to an open access one — an approach that some have described as “magical thinking” and/or impractical (see, for instance, here, here and here).

The Expression of Interest will presumably be accompanied by a roadmap outlining how the proposal can be realised. Who will draft this roadmap and who will decide what it contains is not entirely clear. The conference press release says, “The key to this lies in the hands of the scientific institutions and their sponsors”, and as Pöschl told me, the advice and comments of delegates to Berlin 12 will be taken into account in producing the Expression of Interest. If that is right, should we not know exactly who the 90 delegates attending the conference were?

All in all, we must wonder why there was a need for all the secrecy that appears to have surrounded Berlin 12. And given this secrecy, perhaps we should be concerned that there is a danger the open access movement could become some kind of secret society in which a small self-selected group of unknown people make decisions and proposals intended to impact the entire global scholarly communication system?

Either way, what happened to the openness and transparency inherent in the Berlin Declaration?

In the spirit of that transparency I invite all those who attended the Berlin 12 to attach their name below (using the comment functionality), and if they feel so inspired to share their thoughts on whether they feel that open access conferences ought to be held in camera in the way Berlin 12 appears to have been.

Or is it wrong and/or naïve to think that open access implies openness and transparency in the decision making and processes involved in making open access a reality, as well as of research outputs?

Many words have been spilt over the relative merits of green and gold open access (OA). It is not my plan to rehearse these again right now. Rather, I want to explore four aspects of green OA.

First, I want to discuss how many of the documents indexed in “open” repositories are in fact freely available, rather than on “dark deposit” or otherwise inaccessible.

Second, I want to look at the so-called eprint request Button, a tool developed to allow readers to obtain copies of items held on dark deposit in repositories.

Third, I want to look at some aspects of OA polices and the likely success of so-called IDOA policies.

Finally I want to speculate on possible futures for institutional repositories.

However, I am splitting the text into two. The first two topics are covered in the attached pdf file; the second two will be covered in a follow-up piece I plan to publish at a later date.

To read the first part (a 16-page pdf) please click the link here.
Posted by Richard Poynder at 11:38 15 comments