In the process of writing something about the current state of Open Access (OA) mandates I became intrigued by the mandate introduced at Geneva-based particle physics laboratory CERN.

Officially, CERN introduced a self-archiving mandate in November 2003. Amongst other things, this requires CERN researchers to “deposit a copy of all their published articles in an open access repository”.

This suggests that CERN’s mandate came some ten months after the world’s first mandate – introduced in the department of Electronics and Computer Science (ECS) at the UK’s University of Southampton in January 2003.

When I began enquiring about the genesis of the CERN mandate, however, the picture began to seem less clear. I found it hard, for instance, to establish why CERN had introduced its mandate, and who had been responsible for pushing it through.

Amongst those I contacted for enlightenment was scholarly publishing consultant Alma Swan, who said her understanding was that there had always been a mandate at CERN. Originally this was an analogue mandate, with researchers expected to provide the library at CERN with print copies of all the papers they published, but that this was subsequently upgraded to a digital mandate (in November 2003).

Alma kindly emailed the head of the Scientific Information Service at CERN Jens Vigen for clarification. Vigen also found the question intriguing and began digging around in CERN's archives; and today he emailed me a copy of the original memo from CERN's Director General – officially known as CERN/DG/Memo/5, and dated 17th March 1955.

Vigen commented, “Times have obviously changed since then and I must admit I was smiling quite a lot while reading it. However, the mandate for deposit was, as you see, in place from the very first days of the organisation's life.”

Images of the two-page memo are attached below, and can be accessed as a PDF file here.

This still leaves me with a number of questions however:

1. Is it fair to call the CERN memo an OA mandate given, for instance, that the term OA was only coined in 2001, at the Budapest Open Access Initiative (BOAI)?

2. Similarly what do we make of the fact that the policy was combined with one on press statements? Could it be that this was not intended to refer to scholarly papers?

3. If it can be classifed as an OA mandate, is it truly the world's first, or is there another dusty memo out there somewhere predating 17th March 1955?

4. If it is an OA mandate, why was it introduced at CERN at such an early date?

5. What was the process by which CERN’s analogue mandate was upgraded to a digital mandate. Specifically, who was responsible, and why was it upgraded? 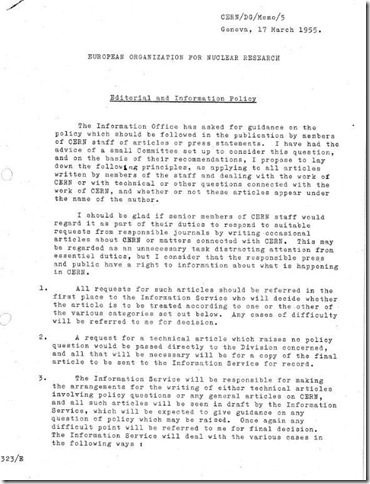 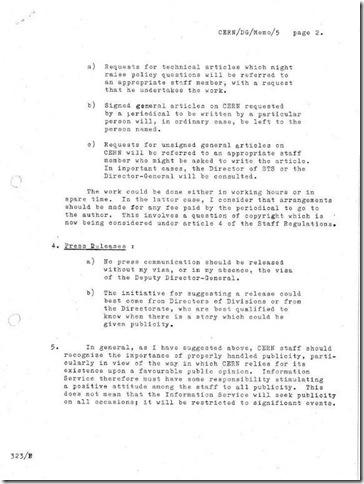 Posted by Richard Poynder at 13:26

For point 1, is the difference between open access and Open Access important enough to not include this as the first mandate?
It does appear to have the same goals, and therefore I believe it to be fair to call it, for now until an early source is found, the first mandate.

I wonder what policies national libraries and royal societies have - as they include some very old institutions - something worth FOIing?

Re; point 5. I started working at CERN in March 2003. At the time, it was in the staff rules (since a circular issued in 2001) that all researchers were expected to submit a copy of their article to the SIS (Scientific Information Service, ie library) and that we would put them in the cern repository (called electronic database in the document, p. 5). This was clearly a mandate for deposit but didn't use the terms OA, or repository, which were terms not yet in circulation. As this was before my time, I leave it for others to comment on how this document came about.

On my arrival, the then Head of the Information Service, Corrado Pettenati, asked me to investigate what was going on in relation to repositories and open access worldwide and to suggest what CERN could do in response. I suggested, among other things, that we should discuss whether open access journals were something CERN should support and possibly have a policy dealing with them and as a result we started working on what became the 2003 policy. In order to get this accepted we had to work with members of the Information Policy Board who thought that the community wasn't yet ready for OA journals, and so if you read the text of the 2003 document and replace "electronic journals" with "open access journals" you'll see more where we were originally aiming. The language used in this policy took for granted that a mandate for deposit already existed and so didn't go into that in much detail.

Though some of the (younger) board members were aware of OA and movements outside physics, it was another two years of discussion and awareness-raising before Corrado thought the board were ready to accept a policy on OA. As a result he asked me to draft the 2005 document "continuing action" which again had to be modified for acceptance by the Policy Board. Corrado Pettenati was the guiding light and input came from Jens Vigen, Rudiger Voss, and probably others though without going through my old notes I don't remember who exactly. We still had some arguments about how far to go and the language was toned down from the original but I was happier with this result and this policy was much more in tune with what we in the library wanted to do. Again, the issue of depositing articles was not elaborated much as the staff rules (in the ciruclar from 2001) were still in force.

Both these policies and the 2001 circular can be read from links here:
http://library.web.cern.ch/library/OpenAccess/PublicationPolicy.html

Corrado Pettenati was an inspirational leader and it was a pleasure for me to work for him. I believe he'd already been at CERN nearly ten years so I presume he also guided through the 2001 document which was the earliest "digital mandate" I saw at cern. As the repository existed since 1993, there may have been earlier ones though.

The discussions prompted by these policies led directly to the SCOAP3 project, which is another story!

Jens Vigen did kindly trace the history of the 2001 Operational Circular No. 6 back for me, as far as he was able. It seems that OC No. 6 replaced something called Administrative Circular No. 29, dated March 1994.

In its turn AC No. 29 cancelled and replaced an information sheet entitled "Principles and Procedures Governing CERN Publications and Reports" dated July 1976.

There was apparently also a document dated August 1961 entitled "Principles and Rules governing CERN Publications". Presumably that reaches back to the 1955 memo whose image I posted.

CERN certainly had the spirit of open access all along. But then you could say the research community all did, for they were giving away their papers all along, throughout the paper era: both to their publishers and to reprint requesters. Indeed, the only reason OA mandates became necessary once the online medium was born, was that 85% of researchers did not wake up to the fact that they could at last make it free for all, big time...