There has always been a contradiction at the heart of the open access movement. Let me explain.

“free availability [of research papers] on the public internet, permitting any users to read, download, copy, distribute, print, search, or link to the full texts of these articles, crawl them for indexing, pass them as data to software, or use them for any other lawful purpose, without financial, legal, or technical barriers other than those inseparable from gaining access to the internet itself. The only constraint on reproduction and distribution, and the only role for copyright in this domain, should be to give authors control over the integrity of their work and the right to be properly acknowledged and cited.”

At the time of the BOAI meeting the Creative Commons licences had not been released. When they were, OA advocates began to insist that to meet the BOAI definition, research papers had to have a CC BY licence attached, thereby signalling to the world that anyone was free to share, adapt and reuse the work for any purpose, even commercially.

For OA purists, therefore, a research paper can only be described as open access if it has a CC BY licence attached.

The problem here, of course, is that the vast majority of papers deposited in repositories cannot be made available on a CC BY basis, because green OA assumes authors continue to publish in subscription journals and then self-archive a copy of their work in an open repository.

Since publishing in a subscription journal requires assigning copyright (or exclusive publishing rights) to a publisher, and few (if any) subscription publishers will allow papers that are earning them subscription revenues to be made available with a CC BY licence attached, we can see the contradiction built into the open access movement. Quite simply, green OA cannot meet the definition of open access prescribed by BOAI.

To see how this works in practice, let’s consider the National Institutes of Health (NIH) Public Access Policy. This is described on Wikipedia as an “open access mandate”, and by Nature as a green OA policy, since it requires that all papers published as a result of NIH funding have to be made freely available in the NIH repository PubMed Central (PMC) within 12 months of publication. In fact, the NIH policy is viewed as the premier green OA policy.

But how many of the papers being deposited in PMC in order to comply with the Policy have a CC BY licence attached and so are, strictly speaking, open access?

There are currently 4.2 million articles in PMC. Of these around 1.5 million consist of pre-2000 historical content being deposited as part of the NIH’s scanning projects. Some of these papers are still under copyright, some are in the public domain, and some are available CC BY-NC. However, since this is historical material pre-dating both the open access movement and the NIH Policy let’s put it aside.

That leaves us with around 2.7 million papers in PMC that have been published since 2000. Today around 24% of these papers have a CC BY licence attached. In other words, some 76% of the papers in PMC are not open access as defined by BOAI. 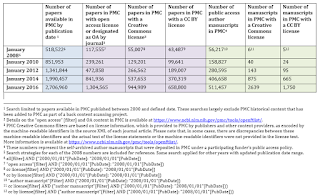 So, although the majority of papers in PMC today are not strictly speaking open access, the percentage that are is growing over time. Is this a triumph of green OA? Let’s consider.

There are two submission routes to PMC. Where there is an agreement between NIH and a publisher, research papers can be input directly into PMC by that publisher. Authors, and publishers with no PMC agreement, have to use the NIH Manuscript Submission System (NIHMS, overview here).

The table above shows that the number of “author manuscripts” that came via the NIHMS route represents just 19% of the content in PMC. And since some publishers do not have an agreement with PMC, the number that will have been self-archived by authors will be that much lower. So the overwhelming majority of papers being uploaded to PMC are being uploaded not by authors, but by publishers, and it seems safe to assume that those papers with a CC BY licence attached (currently 24% of the total) will have been published as gold OA rather than under the subscription model.

We could also note that just 0.06% of the papers in PMC today that were deposited via the NIHMS have a CC BY licence attached, and we can assume that these were submitted by gold publishers that do not have an agreement allowing for direct deposit, rather than by authors.

In short, it would seem that the growth in CC BY papers in PMC is a function of the growth of gold OA, not green OA. As such, we might want to conclude that the success of PMC is a triumph of gold OA rather than of green OA.

Does this matter? The answer will probably depend on one’s views of the merits of article-processing charges, which I think it safe to assume most of the papers in PMC with a CC BY licence will have incurred.

Either way, that today 76% of the content in PMC – the world’s premier open repository – still cannot meet the BOAI definition of open access suggests that the OA movement still has a way to go.

Posted by Richard Poynder at 15:27

OA: Did Researchers Triumph Or Get Trumped By Publishers?

OA advocates are a plurality, not a monolith. “They” do not agree that only CC-BY = OA.

There are two "shades" of OA:

The PMC figures are insufficient. Percent OA in PMC does not even represent percent OA in biomedicine, in the US or globally, let alone in all fields. And PMC, as Richard notes, is largely publisher-deposited, which means it's For-Fee Fool's Gold OA rather than author-deposited For-Free Green OA.

That the percentage OA is growing globally with time is inevitable, as the old researchers are retiring with time, and the young researchers have more sense.

The goal, however, is OA, not "living up to the BOAI definition."

And the growth rate is still absurdly slow, compared to what it could and ought to be (and have been).

In my opinion, the success of open access depends in great measure on the involvement and collaboration of authors.
Firstly, when they choose where to publish. If they don't pay attention to which the self-archiving policy of the journal is, before submitting a manuscript, that is unlikely that they can fulfill open-access policies later.
Secondly, when they submit one of the versions of their article (pre-print or post-print) to a repository, when the publisher's version is not permitted. Over a 75% of articles could be archived in a repository using one of the author's versions, if they submitted them (http://hdl.handle.net/10668/2215).
So, promoting open access among researchers and authors, and making them aware of their options and responsability before submitting an article to a scientific journal, could increase substantially the success of Open Access, specially Libre OA.